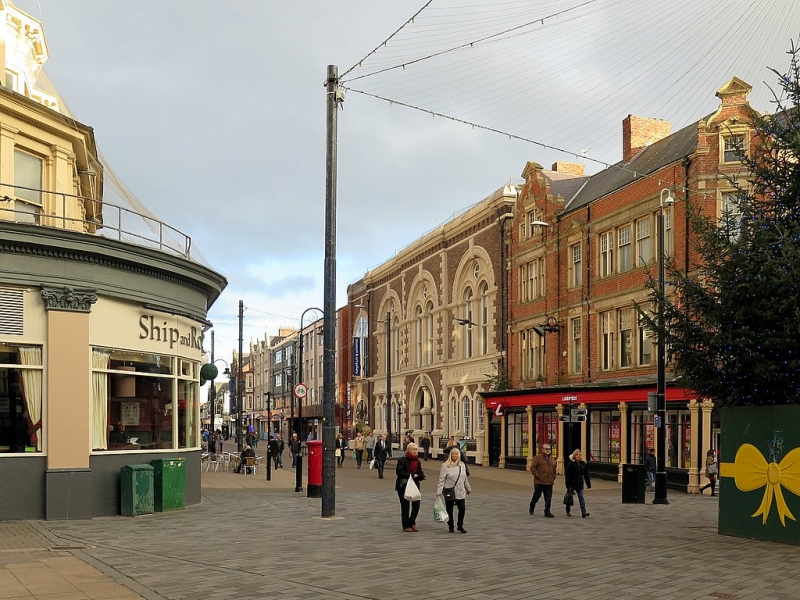 South Shields is a town in South Tyneside

Location and coordinates are for the approximate centre of South Shields within this administrative area. Geographic features and populated places may cross administrative borders.

Shields, South, parl. and mun. bor., seaport, and township, Jarrow par., Durham, at mouth of river Tyne, opposite North Shields, 8 miles E. of Newcastle on Tyne and 269 miles from London by rail - township, 90 ac., pop. 7710; bor. (consisting of South Shields township and Westoe township), 1839 ac., pop. 56,875; 4 Banks, 3 newspapers. North Shields (or Tynemouth) and South Shields, connected by steam ferry, are called the "twin towns." The ports, improved and deepened by dredging and the construction of piers, are capable of accommodating at their quays vessels of any size, and carry on an extensive trade, particularly in coal. South Shields is one of the Tyne Ports. (For shipping statistics, see Appendix.) The industrial establishments of South Shields comprise works for the production of steam-engine boilers and chain-cables and anchors, rope-works, sail-cloth factories, glass-works, potteries, alkali-works, and chemical works. Shipbuilding has declined. The chief architectural feature is a large market square, in the centre of which is a colonnaded building containing the town hall. South Shields is supposed to have been a Roman station, and to take its name from the fishers' huts (or shiels) anciently on its site. In the 13th century North Shields and South Shields had risen to sufficient importance, as ports, to excite the jealousy of Newcastle. At the close of the 15th century South Shields became famous for salt-works, towards the close of the 17th century for glass-works, and in the 18th century for chemical works; but so late as 1750 it was little more than a village. Since that date its prosperity has been rapid and steady. It was made a parl. bor. in 1832, and a mun. bor. in 1850. It returns 1 member to Parl.