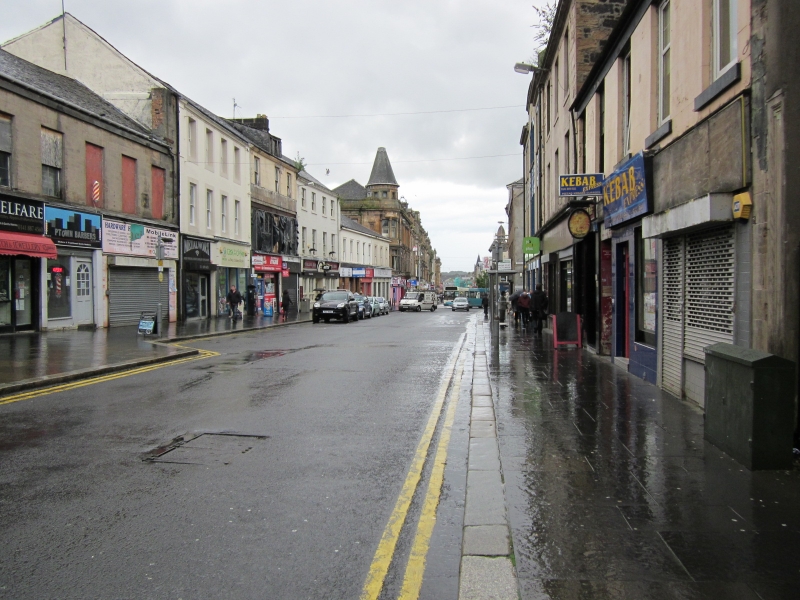 Paisley is a town in Renfrewshire

Location and coordinates are for the approximate centre of Paisley within this administrative area. Geographic features and populated places may cross administrative borders.

Paisley, parl. and police burgh, par., river port, and manufacturing town, Renfrewshire, on White Cart Water (3 miles from its confluence with the Clyde), 6 miles W. of Glasgow and 396 miles NW. of London by rail - par. (divided into Paisley Abbey par., pop. 34,393; Paisley High Church par., pop. 17,914; Paisley Low Church par., pop. 7095; and Paisley Middle Church par., pop. 13,128), 16,794 ac., pop. 72,530; parl. and police burgh, pop. 55,027; town, pop. 55,638; 7 Banks, 3 newspapers. Market-day, Thursday. Paisley, originally called Passeleth, sprang from the Abbey of Paisley, which was founded by Walter, High Steward of Scotland, about the year 1163. This abbey was burned by the English in 1307, and was not rebuilt till the 15th century. The nave is still used as the church of Abbey par., and the edifice now belongs to the Duke of Abercorn. Paisley was made a burgh of barony in 1488, and was granted a crown charter in 1665. It is now a great seat of manufacture. The mfr. of sewing thread made from linen yarn was introduced in 1722, and that of cotton thread is now the staple industry. Paisley has long been famous for its plaids or shawls, but owing to changes in fashion the trade in these shawls has much declined. Tapestry, embroidery, tartan, and carpet mfrs. are also carried on. There are extensive starch and corn-flour works, bleaching and dye works, chemical works, and a ship-building yard. The river Cart has been deepened from 8 to 12 ft., and new docks have been constructed. Among other distinguished natives of Paisley are Robert Tannahill (1774-1810), poet; Alexander Wilson (1766-1813), poet and American ornithologist; and Professor John Wilson ("Christopher North," 1785-1854), poet and essayist. Paisley returns 1 member to Parliament.