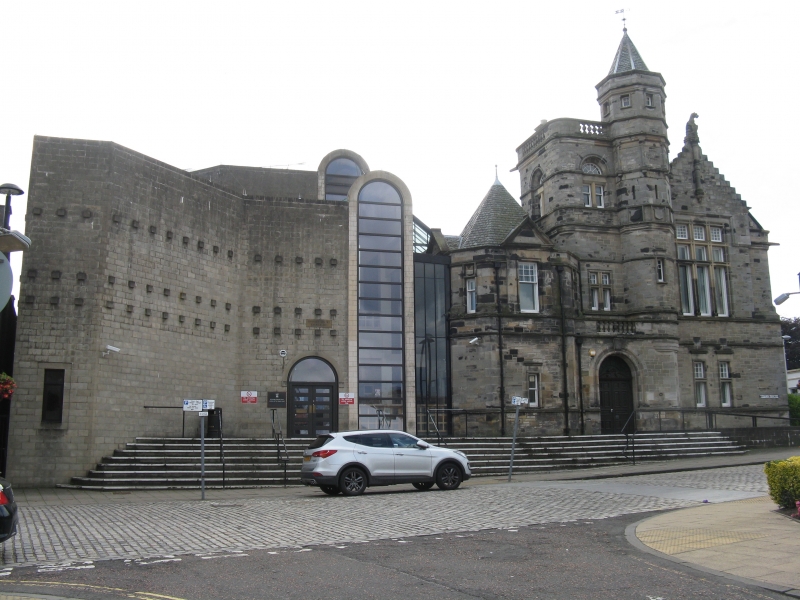 Kirkcaldy is a town in Fife

Location and coordinates are for the approximate centre of Kirkcaldy within this administrative area. Geographic features and populated places may cross administrative borders.

Kirkcaldy, parl. and royal burgh, par., and manufacturing and seaport town, Fife, on Firth of Forth, 15 miles N. of Edinburgh and 402 miles NW. of London by rail--par., 1177 ac., pop. 8528; parl. burgh, pop. 15,056; royal burgh, pop. 23,288; town, pop. 23,315; 5 Banks, 3 newspapers. Market-day, Saturday. The royal burgh, extended 1876, embraces the burgh, parliamentary beyond royal, of Dysart, and includes Linktown in Abbotshall par., Invertiel in Kinghorn par., and Pathhead, Sinclairtown, and Gallatown, in Dysart par. The town, from the great length of its main street, is known as the "Lang Toun." Kirkcaldy was made a burgh of regality in 1334, holding of the abbots of Dunfermline, and a royal burgh in 1450, but almost the only relic of antiquity is the tower of the parish church. The principal architectural ornament of the town is St Brycedale Free Church (1881); it is in the Early English style, and has a fine spire 210 ft. high. Kirkcaldy has long been known for its mfr. of linen cloth--sheetings, towellings, ticks. dowlas, &c.-- and it has some of the largest floor-cloth and linoleum works in the world; it has also machine works, potteries, &c. The shipping trade has undergone many fluctuations, but the improvements and extensions of the harbour are expected to give it a character of greater stability. (For shipping statistics, see Appendix.) Kirkcaldy has numerous ecclesiastical, educational, and literary institutions, including 2 public libraries. Adam Smith (1723-1790), author of the Wealth of Nations, was a native. The parliamentary burgh of Kirkcaldy was extended in 1885, so as to include so much of the municipal burgh as is not comprised within the parliamentary burgh of Dysart. The Kirkealdy District of Parliamentary Burghs (Kirkcaldy, Burntisland, Dysart, and Kinghorn, all in Fife) returns 1 member.