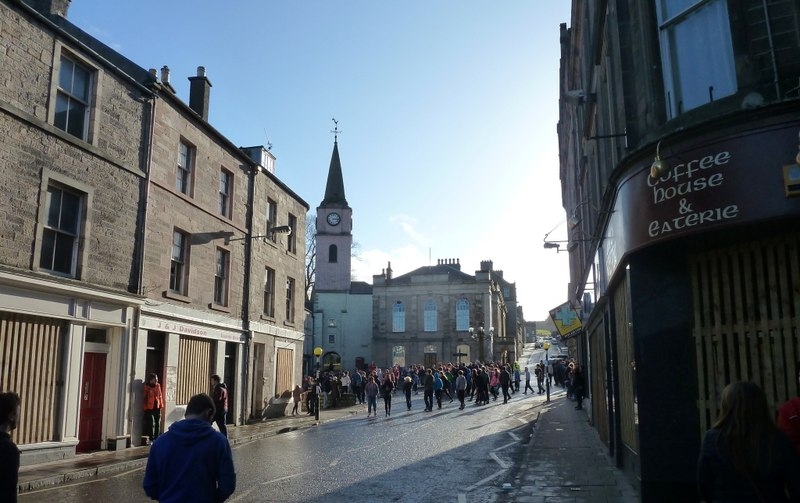 Jedburgh is a town in Scottish Borders

Location and coordinates are for the approximate centre of Jedburgh within this administrative area. Geographic features and populated places may cross administrative borders.

Jedburgh, royal burgh, par., and co. town of Roxburghshire, on Jed Water, 10¾ miles SW. of Kelso and 56 miles SE. of Edinburgh by rail - par., 22,535 ac., pop. 5147; royal burgh, pop. 2432; town, pop. 3402; P.O., T.O., 5 Banks, 2 newspapers. Market-days, Tuesday and Saturday. The mun. burgh includes the suburbs of Richmond Row and Bongate. Jedburgh (popularly called Jethart, and anciently Jedworth, the "town on the Jed") is the centre of business for a large extent of surrounding country, and one of the (earliest) seats of the woollen mfr. in Scotland, the chief articles being tweeds and blankets; it has also an iron-foundry, engineering works, breweries, and tanneries. Jedburgh is an ancient place, dating, it is said, from the 9th century; it was a favourite residence of the Scoto-Saxon kings; in their time and afterwards it was the chief town on the Middle Marches, and one of the centres of Border warfare. The abbey, one of the finest ecclesiastical ruins in Scotland, was founded by David I. in 1118. The prison occupies the site of the ancient castle, destroyed in 1409. The houses still exist in which lodged Mary Queen of Scots (1566), Prince Charles Edward Stuart (1745), Burns (1787), and Wordsworth (1803). Sir David Brewster (1781-1868), the scientific writer, was a native, and James Thomson (1700-1748), the poet, received his early education at the old grammar-school. Jedburgh formed one of the Haddington District of Parliamentary Burghs, which returned 1 member until 1885.