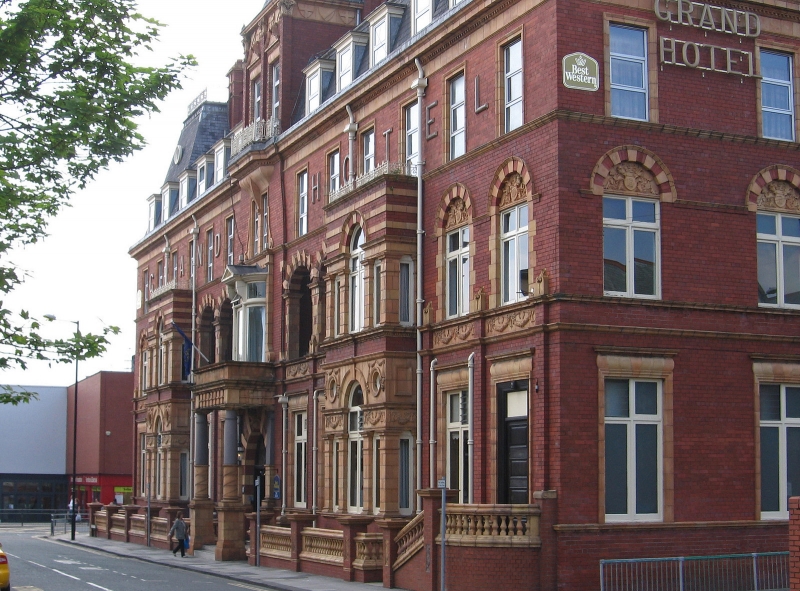 Hartlepool is a town in England

Location and coordinates are for the approximate centre of Hartlepool within this administrative area. Geographic features and populated places may cross administrative borders.

Hartlepool, parl. and mun. bor., township, and seaport, Durham, on a headland N. of Tees, 10 miles NE. of Stockton, 18 miles SE. of Durham, and 250 miles NW. of London by rail - mun. bor. and township (Hart par.), 137 ac., pop. 12,361; parl. bor. (comprising Hartlepool and Throston townships, Hart par., an Seaton Carew and Stranton townships, Stranton par.), 7267 ac., pop. 46,990; 5 Banks, 3 newspapers. Market-day, Saturday. The parl. bor. embraces the mun. bor. of Hartlepool and the town of West Hartlepool (1880 ac., pop. 28,523), and is designated "The Hartlepools." Hartlepool was of some consequence as a port as early as the 12th century. West Hartlepool was founded in 1844, and has risen very rapidly, chiefly through the development of the local iron and coal trade. Shipping, shipbuilding, and the prosecution of coast-fishing, form other valuable employments of the inhabitants. Coal is very largely exported. (For shipping statistics, see Appendix.) There are large brass and iron foundries, engine and boiler works, &c. Of late Hartlepool has been frequented as a bathing-place. Hartlepool Lighthouse, at Heugh, is 73 ft. high, and has 2 fixed lights, 84 and 62 ft. above high water and seen 15 and 4 miles. On the old harbour pier head is a fixed light seen 7 miles. The bor. returns 1 member to Parliament.