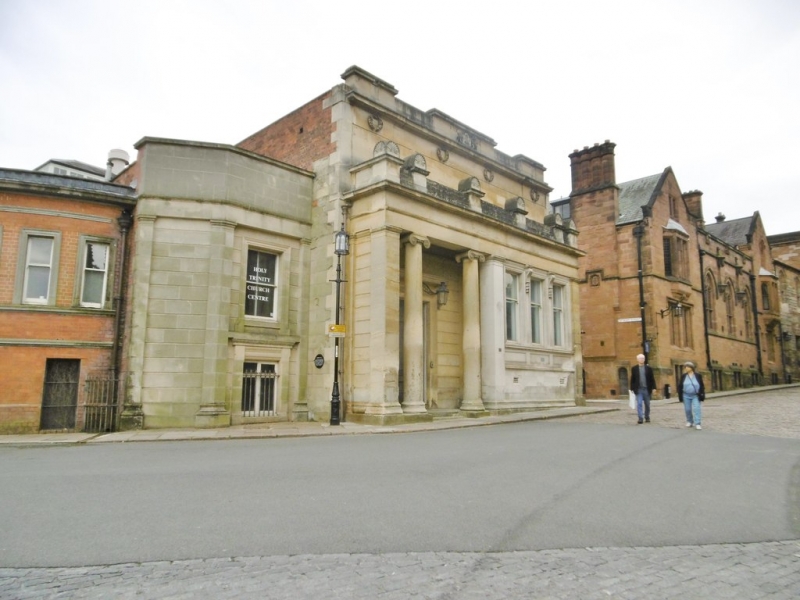 Coventry is a city in England

Location and coordinates are for the approximate centre of Coventry within this administrative area. Geographic features and populated places may cross administrative borders.

Coventry, parl. and mun. bor. and market town, N. Warwickshire, on the Sherbourne and Radford Brook, 18 miles SE. of Birmingham and 94 NW. of London by rail -- parl. bor., 6448 ac., pop. 46,563; mun. bor., 1430 ac., pop. 42,111; 3 Banks, 6 newspapers. Market-day, Friday. C. is an ancient city (the bishopric, founded in 656, was in 1121 united to the see of Lichfield), with numerous fine old churches, schools, and hospitals. It derives its name (Conventre, or convent town) from a priory built (or rebuilt) in 1043 by Leofric and his wife Lady Godiva, of whom there is a curious and well-known legend. Of its fortifications (dismantled at the Restoration, the town having espoused the side of the Parliament), two gates and some portions of the wall still remain. C. was early celebrated for its mfrs. In the 15th century it was noted for its woollens; then for its dyeing; then for its weaving of camlets, shalloons, &C. At present its staples are ribbons, silk, and watches; but it has also woollens, carpets, cotton, art metalwork, and ironfounding. Numerous fairs are held, and are generally well attended. The bor. returns 1 member to Parliament; it returned 2 members till 1885.

Coventry in the Domesday Book

A village in Stoneleigh hundred, in the county of Warwickshire.